​The conversation remained vivid in my mind. It was a crisp spring day at the Little Miami Scenic Trail. My then 10-year-old daughter rode her bike while I ran beside her. A question had been bugging me for the past few weeks. And I threw it out in the open.

"Is it okay if Mommy will become a doctor again?"

The violence in her response shook me. "Why not?"

"Because I won't get to see you anymore! I hardly saw you when you were a doctor."

That hammered the nail in the wood and buried my Doctor of Medicine degree. Never mind the five years I spent in medical school, the three years in anesthesia residency and the five years of private practice as an anesthesiologist. I shooed the temptation to take the US medical licensure away. In the meantime, my pre-med degree of Bachelor of Science in Nursing will suffice to put food on our table until my husband (also an MD) finds a job in this foreign land, the USA.

So what am I doing as a writer eight years later?

A badgering itch. That's how C.S. Lewis described writing. It will torment you until you scratch it.

And because I broke into print at a young age of nine, with my poems for the school paper, the itch started early.

Typewritten words on folded bond papers, stapled at the middle to resemble a romance pocketbook (with the cover, designed by yours truly) circulated in my high school classroom.

But my father, who was a doctor, did not want struggling artists in the family knocking at his door begging for crumbs. So he provided us with the education that can withstand war and peace.

Off we all went to pursue science courses—chemistry, nursing, and physical therapy.

My writing itch eased with charting, nursing care plans, and process documentation. While my classmates detested the long transcription and analysis reports for Psychiatric Nursing, I wrote pages and pages of patient's narratives of neologisms, hallucinations and word salads with much delight. Even research papers excited me.

Then the voice of God shattered my senses, just before I graduated from college.

The dancing, loud praising and crying in the huge Coliseum for the instant miracles and healings of various forms of cancers, paralysis, and diseases did it. It was the Catholic Charismatic Renewal Movement that took my faith to a new level.

I became dead serious in discerning my purpose, my vocation.

I knocked at the Monastery of the Discalced Carmelites and abandoned the comfort of my home for a room with only the bare essentials—a wooden bed without mattress, table and chair, and a small cabinet with two pairs of aspirant's attire.

For three months, I lived a life of solitude—discerned and prayed, worked and ate in silence, painted the Virgin Mary and the Crucified Christ, composed religious songs, and wrote tons of insights and inspirational pieces.

Until one day, I knew it was time to go.

When God leads you, you simply say yes, even when you do not know where.

Like Peter, I could only say to my Lord, "Where else do I go? You alone have everlasting life."

Truly, once I tasted the profound happiness found in doing His will everything else faded into obscurity.

The idea of flying to a remote island as a Jesuit Volunteer gave me both chills and thrill. Those were the best two years of my single life, I have to say.

I saw the power of my pen in the advocacy piece I wrote on the plight of the Vietnamese refugees as it hit the Union Catholic Asian News pages and the grant proposals that got funded to benefit the indigenous communities and marginalized sectors of the church.

The icings on the cake—I met my husband (also a co-volunteer), and I received a precious recommendation from the apostolic vicariate for a full scholarship to medical school.

This experience proved to me that when you fully give your life to God, He fully gives it back to you—​a good measure, packed together, shaken down, and overflowing (Luke 6:38).

And that's how I became a doctor.

Four years into my anesthesia practice, life became predictable. Busy but predictable. The restlessness led to one endeavor after another: became certified as a personal financial planner, started a biodevice importation company, and pursued fleeting hobbies like windsurfing, golf, and blogging.

Then one day, fun runs became a thing. Almost every weekend a running event clogged traffic in the busy metropolis. I trained hard and did not expect anything more than a decent running time.

But the running gave birth to "Running the Millionaire Lane: A Novice Runner's Spiritual Journey in the Material World," my first book. It was the book that clarified my true heart's desire.

Even as we migrated to the US and I worked as a dialysis nurse, I dreamt of the writer's life. I blogged about the immigrant life.

When I enrolled in the Longridge Writers Group Course, I realized there was much to learn about writing. A book or blog does not make one a writer. Only practice does.

I published health articles for Demand Media Studios and wrote inspirational pieces for Examiner.Com in between dialysis duties until I moved to research nursing.

While officemates chatted and drank coffee, I had a heyday reviewing medical literature. So I took and completed the American Medical Writers Association (AMWA) Essential Skills Program, hoping to make a career as a medical writer.

The writing itch festered until that fateful day.

I almost fell off the kitchen stool when my husband got home from work and asked, "Do you want to quit your job?"

I ran, hugged, cried and kissed him. In what order, I don't recall.

He probably got tired of hearing me say, "I need a break. I want to experience being a stay-at-home mom before our oldest child enters college. And I want to write my novel." The story had been knocking at my heart for so long.

I don't know what made him give in to my incessant begging and nagging; probably the countless Masses and Novenas I offered for this particular intention.

So, I wrote my fantasy novel and in three months. I knew then that this was how I wanted to spend the rest of my life. At home. Writing.

I joined the Barefoot Writers and enrolled in AWAI's Copywriting Course, and then life got in the way. More specifically, boxes and home loans got in the way when my husband's job required us to relocate from Ohio to Texas.

When all the boxes were unpacked and gone, I picked up from where I left off and completed the course. This time, I just didn't want to write for a living. I wanted to become God's channel, His writing instrument. His pen.

It was no longer a question of WHAT to write but WHY I write.

I used to ask God what He wanted. Instead He asked me what I wanted.
When I realized that my dream matched God's dream for me, it brought ultimate joy and profound peace.​

To fulfill His dream for me is my duty and my salvation.
​ 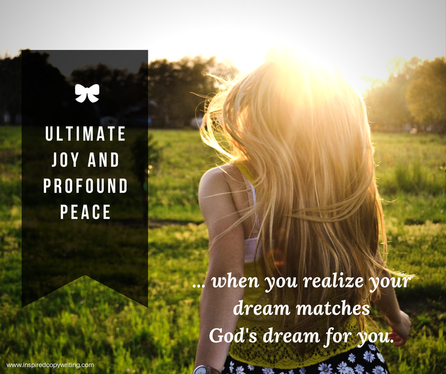 No longer will I allow the dreams of others to derail me from my own. 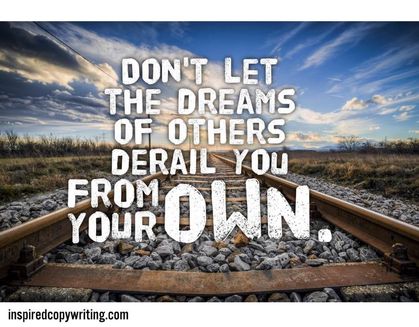 That's how I ended up taking and completing the AWAI's Christian Copywriting Course.

That's how I became a Christian Copywriter.

But just when I thought I had known my call, the Lord made me realize how wrong I was.

In my blog beginning at the Feast of the Resurrection of the Lord, April 16, 2017, I recount my journey as a writer.
Copy blogging alone is not enough to inspire my creative engine. And when I delve too much on fiction writing, my head gets out of touch with reality. When I limit my craft to medical and scientific writing, I become sterile. Narrowing my genre to memoir makes me narcissistic and self-obsessed. I need a constant change of recipe to add variety and flavor to my writer's life.
The key to a fulfilling writer's life is finding the higher purpose for my writing, seeing God's vision, and sharing in His mission to improve the quality of life of His people on earth.

Does my story resonate with you?

Inspired Copywriting will only use your email address for blog updates and newsletters, and will never share or sell your personal information.
UA-92169503-1 UA-92169503-1 COPY CODE