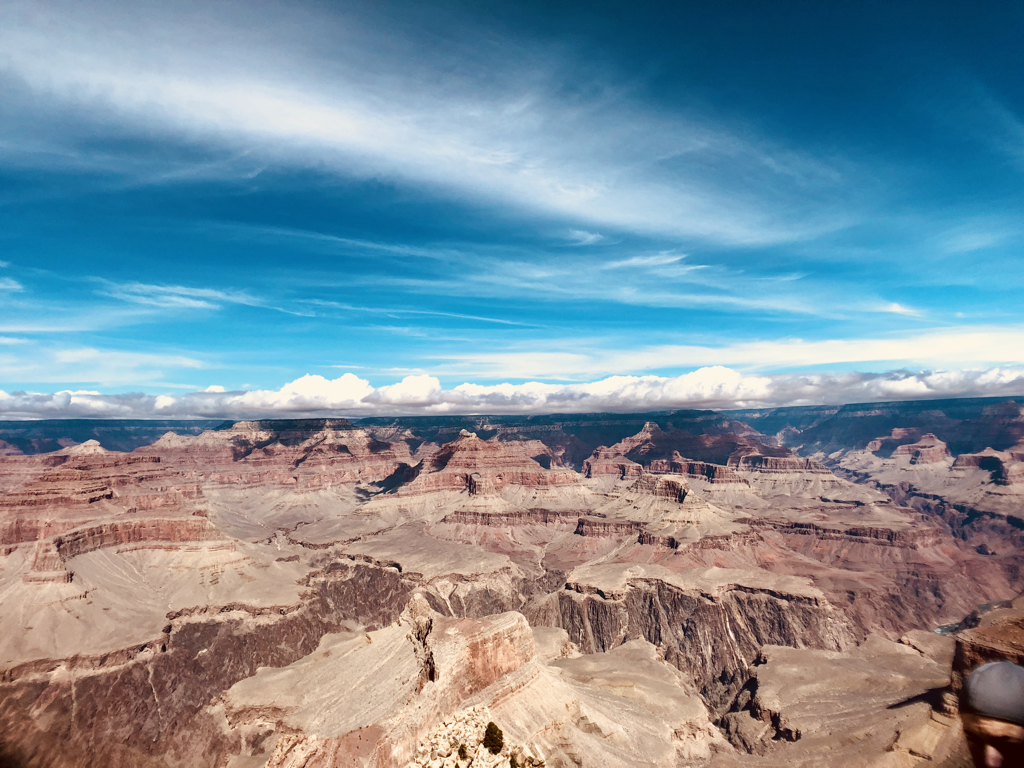 CHAPTER 4
​At the Grand Canyon

I floated over the abyss of jagged mountains, my innards recoiling at the depth below me. I struggled to fly back to the edge of the plateau but my body would not budge. It plunged faster and faster into the ground. No… I held my breath, my stomach cramping from stiffness. The ground drew nearer even as my feet pushed on the air trying to find a brake from this dive. A dark hole appeared below and my head careened deep into the hole. Stuck. Gasping, I pushed to take out my head. Stuck. Arggh. I writhed and wiggled but my head was caught deep. Stuck. Like the pencil in the sharpener.

“You were groaning.” Kate sat up, her hair in disarray.

The image of the pencil stuck in the sharpener flashed. Three dreams. Definitely a pattern. A warning? The image of the flashing light on the mountain came back and made the hair on my arms stand up.

“We missed the sunrise!” Kate jumped off the bed and drew the heavy curtains. Daylight flooded the hotel room.

The girls groaned and pulled the blanket over their heads.

“Get up. Move it.” Kate treated us like a three-membered platoon. The morning was a whirlwind of tugging, whining, and rushing into the SUV.

By the time, we got to the entrance, the queue of cars looked like a track-less train but we skipped it with our pass. Shortly, we found parking and Kate rushed out in her walkathon gait while the girls trailed behind, mimicking her movement while laughing.

I dropped the empty cup in a trash can. When I turned, they were gone. The throngs of tourists in queue for the shuttle created a maze for my sprint towards the Visitor Center. Still no sign of the girls. I dialed Kate’s phone. Darn, no signal.

The swarm of tourists caught and steered me towards a path that led to a sign, which read Mather Point. When the crowd descended down the steps, the vista of the Grand Canyon opened up like wide arms displaying its chest arrayed with mountain lines and ridges.
—-
I gasped, fumbled for my cellphone, and turned on the panorama setting. As I hovered the phone from left to right, Kate and the girls appeared on my camera screen.

I hurried down the stairs and met Kate’s glare.

“Lost but now am found.” I grinned.

“Oh, look at this Jeff.” She held the railing, her hair blown by the wind. In that instant, the lines on her face cleared and she looked younger. “Isn’t this amazing?”

“Smile.” I clicked on my iphone and captured the young-looking Kate before me. “You look amazing.”

“Girls, take a photo of me and daddy.”

But Annie shove her backpack on me. “Dad, can you please hold?” And ran to her sister for selfies.

“You know how to take a selfie?”

“Whatever happened to the drone project?”

“Scrapped. Unoriginal.” I looked away, tasting the bitter memory.

“Sorry. You never told me that.”

She rubbed my back. “You’ll get your idea. Who knows, it might be hidden in those crevices. Look at those.” She zoomed to the big crack in the long flat line of the canyon. “This is… I’m lost for words.”

We stood there like time did not matter until she looked at her watch and opened the park map.

“So what’s the itinerary?” I said.

“Well, I had to make changes and my angel said we should take the blue shuttle bus, hop off and on to the junction where the red shuttle bus can drive us all the way to the Hermit’s rest, and then hike on the Rim Trail all the way back here. We get the best of both bus scenic tour and hiking trail.”

“Your angel said that?”

“Sam taught me how to listen to the voice of my angel.”

She made it sound like it was just turning on the radio.

“What? You don’t believe in angels now?” Her eyes of condemnation peered down at me.

“You offered your angel a retirement package early.”

I looked at my iPhone. Still no signal. I should look for a better provider and a better data plan. Amanda had emailed there were rumors of reorganization. Something’s brewing at Sparker Biotech.

“—nine stops and four on the way back.”

She expelled a breath. “The red shuttle bus. I suggest we hop off to the nine stops on the way to the Hermit’s rest instead of on the way back where it can only bring us to four of these scenic points.”

“Where are the girls?”

“Maybe in the visitor center? I can look for them there,” I said. And perhaps find connectivity.

“Jeff, let’s stay together. Don’t want to lose you again.”

For a second, what she said sounded like she was talking about something else other than the here-and-now.

She shielded her eyes with her hands and scanned the area. “There they are.” She pulled me and soon we were in the long shuttle bus line.

I looked at the visitor center and wondered if I can just sneak in there, check my email then run back. The queue was going slow. I should make it on time. If I can work my way through the crowd in a sec--

“So what are you working at?”

“At work, you said you have a new project you’re trying to push to this new giant techie Sparker company.”

Whew. Her weird spiritual encounters with this Sam guy was giving me the creeps.

“It’s still mostly theoretical but Amanda is developing the prototype based on some solid ideas. Can’t tell you right now.”

She pouted. “You’re drifting away fast, Jeff with all your secrets with this prototype woman. I hope she’s not your type.”

“Kate, please don’t turn on the green-eyed monster button on me. That’s the last thing I want to deal with right now.” Her jealousy fits could drive any sane man to the asylum.

“Like I told you, jealousy button is off as long as my emotional bank account is on the positive. Right now, it’s racking a high-interest rate on the credit line. I’m drawing bouncing checks from your bank, Jeff.”

“Huh? Didn’t my paycheck just get in?”

“I’m not talking about the money, honey. Romance, hugs, kisses, conversations. My emotion is shrinking like a prune. I’m dry to the bones and when that happens, you wake the green-eyed monster.”

I pulled her close and kissed her forehead. “Sorry. It’s just—”

“The merger.” She sighed.

“Ew, they’re merging again.” Annie appeared beside me and pushed her sister in a playful manner. This earned her a slap on her hand.

“Girls, stop that. Don’t want anyone falling on the edge,” I said.

“Look at those people over there.” Kate pointed at a group of young men perched on a boulder while taking a photo.

I squirmed, hoping not to witness a freak accident today, still remembering the book Kate showed me last night.

“Living on the ledge. Why do they have to do that for a stupid photo,” Kate said.

“Whatever. It’s the same. There’s the risk of falling. Just a matter of perspective.”

“No, that’s not so true,” Sarah said. “Ledge is different from edge.”

“One letter. We have to fight over one letter. Geez. The devil is in the details.”

I pulled Kate and shooed the girls away. Another peck on her lips then I let go. “First, let me head to the rest room.”

“Now? But the bus could be here soon!”

“I really need to go.” And it was true. Somewhat. “If you want to go ahead, then go. I’ll meet you somewhere.”

“Okay, we’ll wait for you at the junction, where the red and blue shuttles meet. I’ll get a head start with the photos.”

The rest room stop was fast. And so was the 4G connection.

I answered email after email and almost dropped my phone when it rang.

“No, this is my hot line in heaven!” A grunt and she said, “We’re at Bright Angel Lodge. What on earth are you still doing at the visitor center?”

How did she know? “Your angel told you?” I said with shaky voice.

“Yes!” Another grunt. “And the Find My Friends app. Geez!”

I could hear Annie whining in the background. “Can we eat? I’m hungry. We didn’t have proper breakfast, mom.”

“Go get some food, Kate. Feed Annie’s lion. I’ll be down there in a minute,” I said.

“With that snaking line, I doubt it.” The blade in her voice snapped something in my head.

“Fine! You go your own and I go mine. Let’s compare notes at the end of the day.” I hung up, seething and gritting my teeth. What did she think I was doing, lounging under the sun? I worked my butt off so they could afford these kinds of vacation and I get nothing but complaints. I sweat and they want to suck my blood as well. What was a minute to answer emails? I looked at my watch. Not a minute. An hour. Had it been that long? I sizzled down a tad, headed to the shuttle line, and groaned.

Where did all these people come from?

It would be another thirty minutes to get to the girls and Kate. My energy drained like my phone battery. All I wanted to do was crawl under the hotel sheets and escape the certainty of Amazonian wrath.