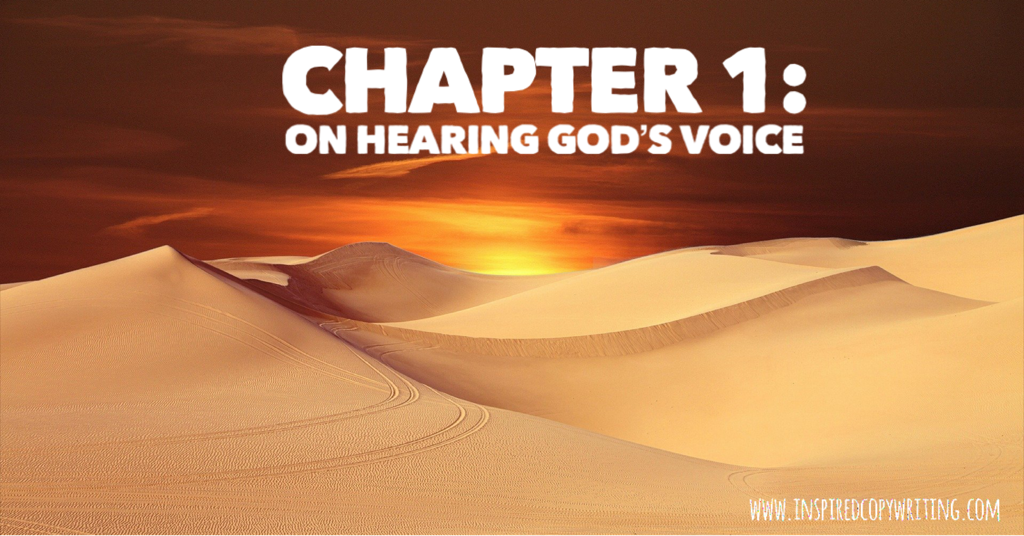 I have to establish this early on because a high school classmate recently asked me about hearing God’s voice. She’s been having weird experiences lately.

​Amidst the COVID-19 global pandemic, when people in quarantine hear many voices, ranging from the apocalyptic, psychopathological, scientific, or political, I regard this kind of question with caution. I'm in no position to discern the voices that people hear in their heads. I have enough of my own to unravel.

I have written about God’s voice in my book, Running the Millionaire Lane back in 2007, and another friend asked, “Was that a colloquy or soliloquy?”

It’s hard to tell. I can only point at the pieces of evidence as a testimony. Following my Running Mate’s advice in that book has put my family and me on higher grounds since the time the four of us came to this foreign land in 2009 with seven brown boxes on a trolley at the LA airport. It was as though the book became my road map towards an abundant life.

Only God could have given my husband and me the courage to leave our medical practices behind and embark on an adventure and misadventure of a lifetime.

When God called in 1992, I followed, even when He led me to a wild goose chase.

And I find that a constant vexation. Often, He points me in a direction and doesn’t explain why and how. As I grope in darkness, He holds my hand and says, “Do you trust me?”

Being a controlling person, I end up like Jacob or Jonah, battling and throwing a tantrum at Him.

“Do you want to leave?” He’d ask when I’m pushed to the wall.

I always fall on a heap and cry, “Where else will I go? You alone make me feel alive?”

Yes, that has been the story of my life—the End. But God wants me to elaborate and describe.

“Look, I don’t have time. There are the kids and my work and the chores.”

Ignoring Him is an exercise of futility. Characters come to life and bother me from behind the steering wheel. They talk and fight while I strain to focus on the traffic lights. The writer’s itch needs a good scratching. “I want a sabbatical to get the novel together,” I tell Him.

My husband comes home one day and tells me, “Do you want to quit your job?”

In three months, I finish the arduous task. “It’s finished.” And I am ecstatic. But the critics, agents, and editors aren’t. Show, don’t tell. Resist the urge to explain. Don’t start with cliches. Use active voice, not passive. The rules lay on my shoulder like a yoke, and I buckle. I abandon my characters.

On top of my husband’s support, my parents add their own, enabling me to buy books, enroll in writing courses, attend writing conferences, and create my website.

And God nags, “Tell your story.”

Another character jumps on the bus while my family is on vacation at the Grand Canyon. But the web novel hits the wall in Chapter 10. The sagging middle collapses my dream.

But God doesn’t let up. “Tell your story.”

I pick up the book, Running the Millionaire Lane. Maybe I can find an editor to repurpose the book. After all, this is where my writing dream started. This is my story.

After a long conversation with the editor, all I can remember her say is, “You sound like you’re describing a clinical case. Maybe write a different story.”

For me, that translates as “It’s uneditable.” I have gotten so used to writing patient narratives my voice must sound so sterile.

Crushed, I falter and cry out to Him. “Look, I can’t do this. Find someone else with a Master's in Creative Writing. I have failed so many times, I don’t think I can ever be good enough.”

“I don’t have the courage.”

Of the three excuses, the last is the steepest mountain to climb. No longer is He just holding my hand. He’s dragging me up the mountain, scraping on stones and ragged edges.

Many times I wonder, is the voice even real? But circumstances make me blush with shame. Why do I doubt when it led me to a workshop of memoirist Lisa Dale Norton at a nearby library and gave me a roadmap in her book, Shimmering Images? And then Jerry Jenkins' Dreamers to Authors come to the rescue when I start to falter.

How much spoonfeeding do I need? Should God resort to threats to get me going? The shadow of death had breezed past me many times to kick me off complacency.

An accident on the bike trail with the 911 ambulance and firetruck disrupting what should have been a lovely spring morning that ended up in the ER in 2015 pushed me to the writing sabbatical. Another ER scene in 2019 with burning pain in my diaphragm wrenching to the back jolted my writing inertia. Do I need another ER event this time to get me going? With Miss Corona prowling like a lion queen, I wouldn’t want to take any more chances.

Write my story. I’ve ran out of excuses. But where do I begin?

Should I start from when Papa home-delivered me and Mama ended up bleeding and had to be rushed to the hospital, while I lay shivering and crying in the corner? It was a dream which turned out to be true when I asked Mama about the circumstances of my birth.

But a memoir is not an autobiography. You don’t start from the beginning. “Write the shimmering images that stand out from your memory,” Lisa’s voice resounds. “Piece it together with a theme.”

Accomplishments rise to the pedestal, being the over-achiever that I am.

Perhaps like my first book, I can use running as a metaphor. Running and winning the beauty contest at 18, running to the Carmelite Monastery at 22, running along tribal minority men in the mountains of Palawan, running a story on the plight of the Vietnamese refugees in the Union Catholic Asian News, running to medical school and finishing without a loan, running after my husband with a toddler in tow to windsurf even when I didn't know how to swim, and running to the US at the height of our practice. But it sounds so Narcissistic.

I want to write something that would glorify God. After all, if not for His guidance I wouldn’t have been able to achieve the impossible, like drive a manual transmission car in three days, pass the driver's test in one take with my eyes closed as I backed up the SUV between four poles, transition into a full-time housewife role with a credit score of 800+ after two years of being the sole breadwinner of the family, lose pounds and weigh even less than my pre-marriage weight without going through some fancy diet, run the half-marathon after suffering from chronic low back pain for seven years, cope with my first-born's moving to college by adopting a strange pet that feeds my family, marry my passion for cooking with my medical training through Culinary Medicine, or pass the Certification for Professionals in Healthcare Quality without formal training and after four years of being a stay-at-home mom.

Although St. Paul says, "Whoever boasts should boast in the Lord," I have my misgivings. There’s a thin line, which I can easily cross.

Perhaps, I can write about how my past experiences prepared me for this quarantine. Growing up under martial law, when sirens at nine o'clock in the evening herald the curfew make this experience a walk in the park. Or I can describe how my monastic experience quickly translated into the current situation. Or perhaps, I can highlight how my provincial life of growing our own vegetables in the backyard inspired me and my husband to do the same as a way of coping with the current situation.

But it’s still missing the X factor. I need a compelling hook.

God says, “You need the S factors to thread your shimmering images into common themes for your chapters.”

“S factors. Hmm, now I know where You’re pushing me. But one last question. Why a memoir? Am I dying?” I need to know so I can make sure my husband knows all my passwords, that we have a will in place, my insurance has enough to cover for my cremation, or maybe donate my body to the medical school where I graduated. Sounds morbid, right? But I have to make sure my daughters know how to cook vegetarian meals for my husband, and not put him in a nursing home when he retires. Dear Lord, I have a lot of fast-tracking to do. “Am I dying?” I have to know.

And God says, “Finish your story, so you start living.”

And where do I begin? Maybe back to where it all started, when I first heard God’s voice twenty-eight years ago?